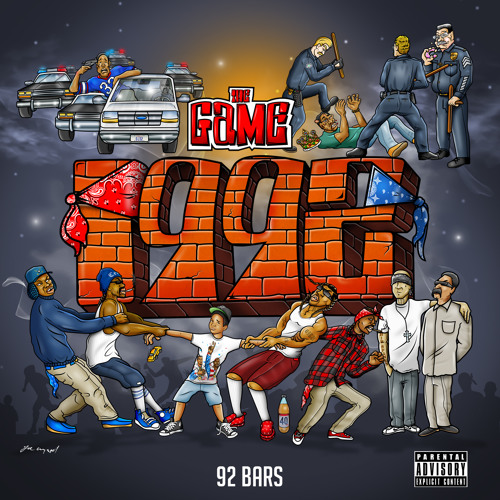 Boy it has been a busy past few 24 hours for Westcoast emcee, The Game.  As after having the pre-order put up for his highly anticipated new autobiographical album, 1992, last night and in conjunction with that releasing his new double single, True Colors/It’s On, the Compton native also dissed his former allie Meek Mill during a show at Miami’s Club Story during his current promo tour in support of the album.  It’s no source of why the beef started and seemed kind of out of left field considering the two collaborated just last year on one of the more standout tracks of The Game’s career with the very soulful, The Soundtrack.  Which was also supposed to originally be on the L.A. natives The Documentary 2 album he released last year, but didn’t end up making the final cut on the final album.  While today Game is taking aim at Meek in a new diss track, 92 Bars, which was premiered on popularly syndicated New York radio station Power 105’s The Breakfast Club early this morning.  The penimultive vicious track, which is also the closing track for 1992, has some of the same bars previewed by the Westcoast emcee during his performance last night at Club Story where he first dissed Meek live onstage in front of a live audience.  Whether it’s a full blown on slaught or not and even if you don’t really like beef, you gotta at least appreciate The Game putting bars back at the forefront of Hip-Hop again.  With 92 Bars showing why when he’s on, Game is one of the best lyricists in all of Hip-Hop too and you can see by listening below.