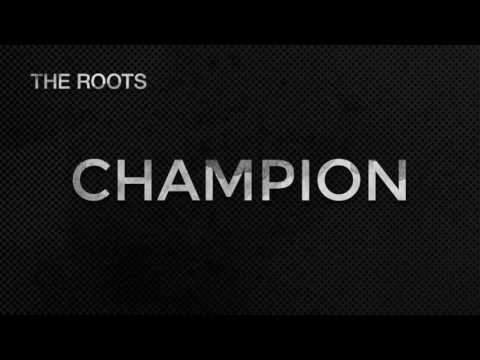 The NBA Finals are fast approaching and with only a little over a week till they start on June 2nd, the NBA has kicked into full gear promotion for the Finals with a commercial debuting earlier today on ESPN that featured The Roots, Larry Bird, Magic Johnson and Michael Jordan with what appeared to be new music from the Illadelpha crew.  You may ask yourself, “Why The Roots?”  But if you think of legendary and champions in Hip-Hop, live bands and music in general you think of The Legendary Roots Crew.  So it should actually come as no surprise the NBA ended up commissioning The Roots for the exclusive track that is the official 2016 NBA Finals theme song, Champion.  With the seamless marriage of Sports and music and in particular Hip-Hop throughout the years, the collaboration makes perfect sense too.  With the great repertoire The Roots have had with the NBA this year and even in years past it makes perfect sense as well.  As their Stay Cool track from their 2014 album, The Tipping Point, has even been featured in the latest Gatorade commercial with Dwyane Wade and NBA legend George “The Iceman” Gervin that has been making its rounds throughout this year’s NBA Playoffs.  With both conference finals still raging on to decide which two teams will actually play in the Finals, Black Thought and The Roots give some very inspiring and motivational music with their new track to make you feel like a champion.  With Black Thought also showing why he’s a champion of the mic and one of the greatest emcees to ever touch a mic.  Listen to the inspiring anthem below to get inspired and motivated to become a champion yourself.