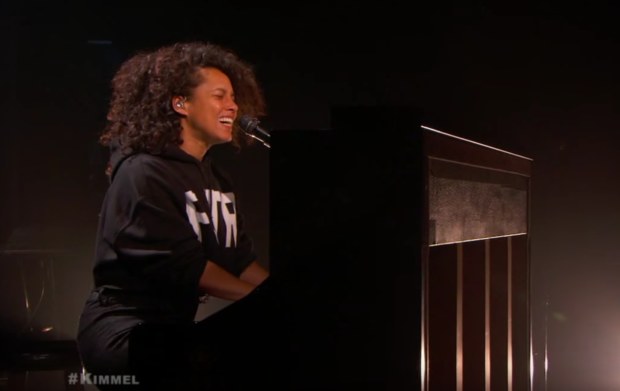 Last night on Thursday nights episode of Jimmy Kimmel Live!, Jimmy had a really stellar lineup of Alicia Keys and Kerry Washington as guests on the show.

Ahead of her performance for this Sunday’s upcoming Grammys, Alicia performed on Kimmel, one of the more standout records from her latest album, HERE, with her latest single, Illusion of Bliss.

Giving a very deep, emotionally and stirring performance that was by far one of her best ever and you could really feel all of the emotions of when she performed it.  Which you can tell took Alicia to another place and showed once again why she’s one of the most elite performers ever.

Before the performance Alicia sat down with Jimmy too for one of the best, most fun and real interviews I’ve ever seen and/or heard from her.  As she talked about the process of making the album, her and Jimmy’s love for cocoa butter and how her oldest son Egypt landed on Kendrick Lamar’s latest project.

Speaking of the Gramnys, in another clip below you can see Alicia speak on what her mind-blowing reaction was to all the success and Grammys she won for her critically-acclaimed debut album, Songs in a Minor, nearly 15 years ago during her first ever Grammy’s in 2002.

In another clip below you can also get Kerry’s take from the beginning of the broadcast about why she loves Alicia so much and the one time she got to direct a video for Common that her and Alicia both starred in.