Rappers Being Hit By the Recession.

So, I was reading the Wall Street Journal and I came across this article.  This is just hilarious. 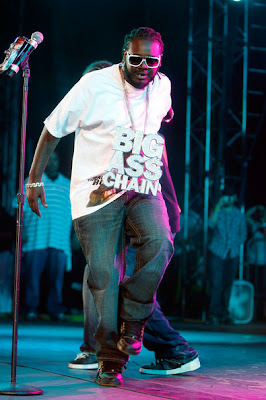 After years of starring in rap-music lyrics and videos, “bling” is losing its ring.

The recession is cramping the style of hip-hop artists and wannabes — many of whom are finding it difficult to afford the diamond-encrusted pendants and heavy gold chains they have long used to project an aura of outsized wealth.

In an attempt to keep up appearances, celebrity jewelers say rappers are asking them to make medallions with less-precious stones and metals. Some even whisper that the artists have begun requesting cubic zirconia, the synthetic diamond stand-in and QVC staple.

Hip-hop luminaries with the cash to keep it real are appalled. Bling aficionados fret that the art of “ice” is being watered down.

New Orleans rapper Lil Wayne is often credited with coining the term ‘bling’ to refer to outrageous jewelry.
Rapper 50 Cent has relished the chance to accuse his musical adversaries of not glittering like gold. During a radio interview, the artist, whose real name is Curtis James Jackson III, taunted rapper Rick Ross for wearing faux and rented jewelry. “Everything that you see has to absolutely be fake,” said Mr. Jackson. Rick Ross, whose real name is William Leonard Roberts II, has denied the claims. Mr. Jackson didn’t return requests for comment.

“A lot of these rappers simply don’t have the money for real stuff anymore,” says Jason Arasheben, who crafts custom jewelry for wealthy clientele, including Saudi royals and Hollywood movie stars, at his California boutique called Jason of Beverly Hills. “It’s to the point where they are wearing imitation jewelry, and that’s ridiculous.”

Mr. Arasheben designed the colossus of hip-hop jewels three years ago for rapper Lil Jon: an enormous gold necklace that spells out “CRUNK AIN’T DEAD” with 3,756 round-cut white diamonds (Crunk is a southern rap subgenre that Lil Jon — real name, Jonathan Mortimer Smith — has struggled to keep alive). The neck-straining piece, which weighs more than five pounds, was recognized in 2007 by Guinness World Records as the largest diamond pendant on Earth.

‘Big, Chintzy Junk’
He also fashioned a pendant in the image of headphones bedecked in black and white diamonds a few years ago for rapper Biz Markie, whose whimsical jewelry hailed from a less self-conscious era in rap. The rapper — whose real name is Marcel Theo Hall — says he is saddened to see newer rappers favor big, chintzy junk over smaller jewels that illuminate personality.

“When I was wearing a big rope, it was a symbol that I was one of the elite,” says Mr. Hall, whose 1990 hit “Just a Friend” is enjoying a renaissance on iTunes after being featured in a Heineken beer television ad. “These kids think size matters, but they be lyin’. It just makes them look silly.”

Both Mr. Smith and Mr. Hall had planned to sell their pieces for charity last fall in an auction titled “Hip Hop’s Crown Jewels.” But in a sign of bling’s fading shine, Phillips de Pury & Co. postponed the auction to March and then canceled it altogether due partly to insufficient interest from buyers.

From the dawn of rap music three decades ago, hip-hop artists have festooned themselves with gaudy ornaments to signify that they have risen above humble origins to become ghetto royalty.

To be sure, phony or inferior ice has been around as long as rappers’ traditional standard gear of two-turntables-and-a-microphone. But with Internet piracy cutting into musicians’ record sales and the recession shrinking attendance for live shows, jewelers say the ersatz stuff has never been more widespread.
“Times are hard, ain’t nobody rocking it like that anymore,” says rapper and record executive Bryan “Birdman” Williams, who co-founded Cash Money Records in New Orleans in the early 1990s with his brother, Ronald “Slim” Williams. The independent label has sold more than 45 million albums.

The founders of the record label claim that its most famous artist, Lil Wayne, coined the term “bling” during a recording session to give a sound to blinding opulence. The word entered popular usage after the hit “Bling Bling” by then Cash Money artist B.G. and was added to the Oxford English Dictionary in 2003.

‘D-Quality Diamonds’
“People think these big pieces are blindin’ but they be like D-quality diamonds, and when you try and sell them you learn they ain’t worth a thing,” says Slim Williams. “You can’t be doing it like we did it no more.”

In humid Houston, a Southern rap capital renowned as a mecca of ice, jeweler Johnny Dang says he is adapting to the changing climate by giving customers the less-expensive jewelry they want.

“The look is still big, it is still bling, but people are going with smaller diamonds and lower-karat gold,” trading down from 18- and 14-karat alloys to 12k, which is only 50% gold, or less, says Mr. Dang. A Vietnamese immigrant, he started out at flea markets and now has a shop in the tony Galleria mall next to Neiman Marcus.

To survive, Mr. Dang is relying more often on machine-made versions of his jewelry that can cut the cost of a $10,000 handcrafted pendant in half.

Mr. Dang’s “grillz” sales also have fallen off 60% in the recession. He and his business partner, the rapper Paul Wall, helped popularize the bejeweled dental retainers earlier this decade, when diamond-laced varieties molded with platinum were selling for tens of thousands of dollars.

Melting Down Grillz
Now the recession has so damped the extravagance that a Web site called sellyourgoldteeth.com is doing brisk business buying grillz for meltdown value. “It’s a sign of the times,” says Mark Porcello of Porcello Estate Buyers, which runs the site.

Hip-hop artists aren’t eager to admit to thrift, and numerous rappers rumored to be trading down declined to talk about the trend.

“You gotta understand, it is every rapper’s fear to be exposed as a fraud,” said Gregory Lewis of Brooklyn, who posts conversations with artists on the Internet under the alias “Doggie Diamonds, the interview king.” “If you admit you wear fake jewelry, it is over for you. It’s like bragging you drive a Lamborghini when you really drive a Toyota.”