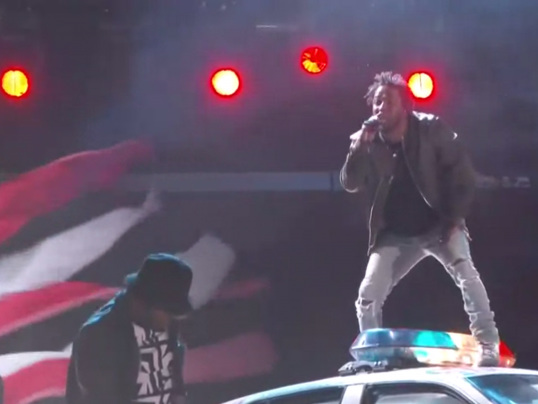 Last night Los Angeles’ very own Kendrick Lamar opened the 2015 BET Awards at the Microsoft Theater in his hometown with a rousing and politically charged performance of his latest single, “Alright,” off his critically acclaimed sophomore album, To Pimp a Butterfly.  Which was released this earlier this year.

Standing above a graffiti-embossed police car that had TDE spray painted on it and a gigantic tattered American flag, which flanked over it, K-Dot let the big guns out for the highly energetic performance.  As his backup dancers, who break-danced in TDE tees with waving flags hoped from the stage into the audience.  With Kendrick even adding a new verse before the end of the performance.

An anticlimactic performance of sorts with all the problems a lot of the African American youth have experienced within the past year and quite fittingly the Compton bred emcee won the award for Best Male Hip-Hop Artist after the performance.  The performance can be seen below.