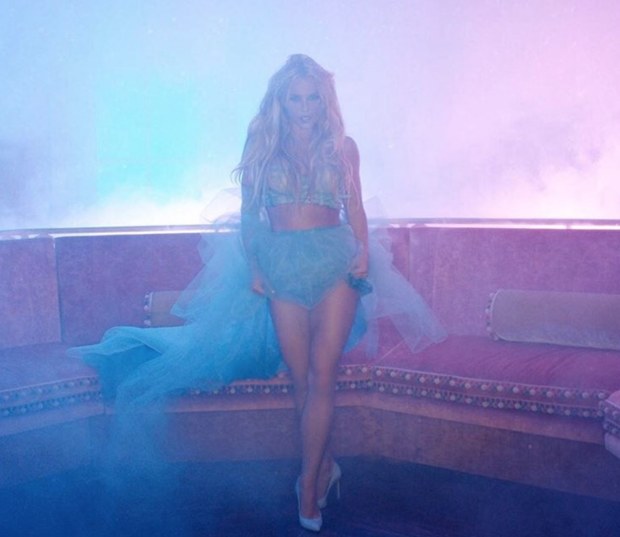 Pop Princess Britney Spears said in the chorus to her latest smash hit single, Slumber Party, “We ain’t gonna get no sleep” and she made sure of that by premiering earlier today in the wee hours of Friday morning through Vevo, the racy and raunchy Colin Tilley-directed video.

The updated version, which she premiered just a few days ago and is the remix features, rising in her own right, Pop star Tinashe and starts off with Britney pulling up to a mansion in a classic car.  The Pop Princess then strides in with bubbles floating and people in wild costumes and makeup, just laying around, like you would probably only see in a vampire or another risqué type movie.  Before breaking off into a nice cheorographed dance sequence.

She’s then joined by Tinashe with the Los Angeles singer/songwriter dressed in lingerie and slumber party type attire, laying and rolling around on a couch.  Before she’s joined by her idol, who rolls around the couch with her and even cuddles with her, as the two Pop stars even get a little touchy feely.

Though there is a lot of lingerie and plenty of eye candy laying around, the two women are the stars of the semi-masquerade visual.  Even showing off their own sexy dance sequences in the endless night of slumber party fun.  Watch the pure indulgence below as Britney and Tinashe, do like the “Neighbors say they’re causing a commotion” in the Eyes Wide Shut-themed clip.