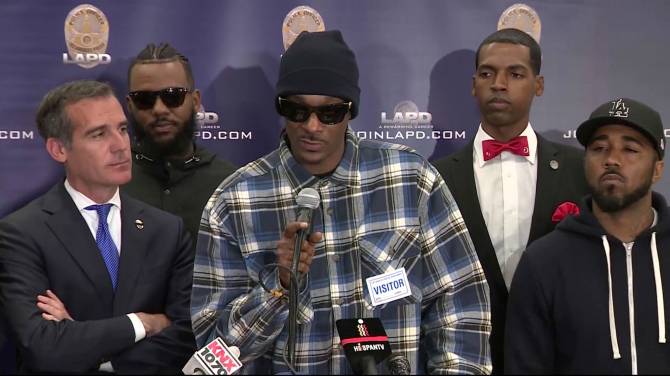 It took the recent killing of his foster brother in Los Angeles, but rapper, The Game teamed with fellow rappers Snoop Dogg and Problem yesterday Sunday July 17th at an anti-violence summit at a South L.A. community center in their recent continued quest of unity and peace.

After meeting with Los Angeles Mayor Eric Garcetti and Police Chief Charlie Beck within the last month, the rappers and city officials teamed up for the gang summit over the weekend where a few hundred gang members were called together for the anti-violence summit to hear speakers discuss the importance of unity in the community.

As the crowd heard pleas for peace from everyone such as current and former gang members to entertainers, activists and preachers from the Nation of Islam that included not only The Game, Snoop and Problem, but also Garcetti, Beck, radio personality Big Boy, singer will.i.am and rapper Bad Lucc.  With Garcetti and Beck shaking hands with Game outside in a show of unity.

Beck said how it was a “great first step,” in the right step to curb the violence, and especially after all of the recent police shootings that have plagued the country over the last few weeks.  With the most recent one being the three officers who were shot and killed in Baton Rouge, Louisiana on Sunday morning just before the meeting took place.

The Game, who was born Jayceon Taylor, in Compton, California, fought back tears when he recounted the recent shooting death of former gang member and his foster brother, whom he grew up with in foster care and called Spanky.

“I’m here to be his voice,” said the 36-year-old, multi-Platinum selling rapper.  Also adding that the gathering was also a decision he made for his own children.  Saying by the time his daughter, who is 5 turns 18, “I want her to walk out the door, and I want it to be a little bit … safer.”

Game also said how the conversation needed to be had, with him and other entertainers needing to realize more their influence on young people and how to serve as better role models.  He told The Associated Press on how he hopes to keep the conversation going too.

“You know, it’s like a bus going through the city, a bus of love and a bus of positivity.  We want to keep the doors open.  We want everybody get on the bus.”