WikiLeaks Website Pulled by Amazon after US Political Pressure 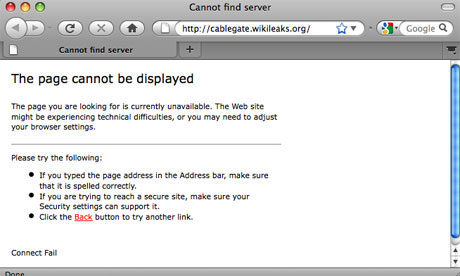 The US struck its first blow against WikiLeaks after Amazon.com pulled the plug on hosting the whistleblowing website in reaction to heavy political pressure.

The company announced it was cutting WikiLeaks off yesterday only 24 hours after being contacted by the staff of Joe Lieberman, chairman of the Senate’s committee on homeland security.

WikiLeaks expressed disappointment with Amazon, and insisted it was a breach of freedom of speech as enshrined in the US constitution’s first amendment. The organisation, in a message sent via Twitter, said if Amazon was “so uncomfortable with the first amendment, they should get out of the business of selling books.”

While freedom of speech is a sensitive issue in the US, scope for a full-blown row is limited, given that Democrats and Republicans will largely applaud Amazon’s move. Lieberman, though an independent, is a former Republican who switched to the Democrats last year.

The question is whether he was acting on his own or pressed to do so by the Obama administration, and how much pressure was applied to Amazon.

Although there are echoes of the censorship row between Google and China earlier this year, constitutional lawyers insisted it was not a first amendment issue because Amazon is a private company, free to make its own decisions.

The WikiLeaks main website and a sub-site devoted to the diplomatic documents were unavailable from the US and Europe yesterday, as Amazon servers refused to acknowledge requests for data. WikiLeaks switched to a host in Sweden.

Lieberman said: “[Amazon’s] decision to cut off WikiLeaks now is the right decision and should set the standard for other companies WikiLeaks is using to distribute its illegally seized material. I call on any other company or organisation that is hosting WikiLeaks to immediately terminate its relationship with them.”

Kevin Bankston, a lawyer with the Electronic Frontier Foundation, which supports internet freedom, said it was not a violation of the first amendment but was nevertheless disappointing. “This certainly implicates first amendment rights to the extent that web hosts may, based on direct or informal pressure, limit the materials the American public has a first amendment right to access,” Bankston told the website Talking Points Memo.

The development came amid angry and polarised political opinion in America over WikiLeaks, with some conservatives calling for the organisation’s founder, Julian Assange, to be executed as a spy.

The fury building up among rightwingers in the US, ranging from the potential Republican presidential candidate Mike Huckabee to conservative blogsites such as Red State, contrasted with a measured response from the Obama administration. The White House, the state department and the Pentagon continued to denounce the leaks, describing them as “despicable”. But senior administration officials, with a sense of weary resignation, also called on people to put the leaks into context and insisted they had not done serious damage to US relations.

The White House press secretary, Robert Gibbs, shrugged aside as “ridiculous” a call by Assange, interviewed by Time magazine, via Skype from an undisclosed location, for the resignation of the secretary of state, Hillary Clinton, over an order to spy on the United Nations. “I’m not entirely sure why we care about the opinion of one guy with one website,” Gibbs said. “Our foreign policy and the interests of this country are far stronger than his one website.”

John Kerry, the Democratic head of the Senate foreign relations committee, on Sunday denounced the leaks but he sounded more sanguine at an event in Washington on Tuesday night. He said there was a “silver lining” in that it was now clear where everyone stood on Iran. “Things that I have heard from the mouths of King Abdullah [of Saudi Arabia] and Hosni Mubarak [Egyptian president] and others are now quite public,” Kerry said. He went on to say there was a “consensus on Iran”.

But others, particularly rightwingers, are seeking retribution, with Assange as the prime target. Legal experts in the US were divided over whether the US could successfully prosecute Assange under the 1917 espionage act. Sceptics said the US protections for journalists would make such a prosecution difficult and also cited pragmatic issues, such as the difficulty of extraditing Assange, an Australian.

Huckabee, who was among the contenders for the Republican presidential nomination in 2008 and is likely to stand again in 2012, told the Politico website: “Whoever in our government leaked that information is guilty of treason, and I think anything less than execution is too kind a penalty.”

His later comments suggest he had in mind Bradley Manning, the US private in Iraq who is suspected of leaking the information and is under arrest in Virginia, rather than Assange.

Typical of attacks on Assange is a blog by lexington_concord on Red State, a popular rightwing site, in which the writers says Assange is a spy.

“Under the traditional rules of engagement he is thus subject to summary execution and my preferred course of action would [be] for Assange to find a small calibre round in the back of his head.”