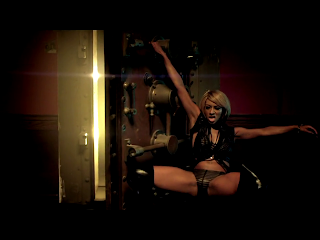 So by now most of the fired masses on these Internets have jumped on Keri Hilson for her recently released video. I dropped comments too because I don’t think it was a good video. Raunchy yes but not a good video IMO. But with that said the over the top back lash is a bit comical to me. Especially at a time when so many folk are picking sides between Nicki and Kim but Keri is the villian for her wild expression?

I’m hearing that Keri is looking for attention, she’s stooped so low, why she have to do this and the oh so classic “She’s trying to be like Bey”. Now, I’m no female so perhaps y’all view this stuff differently but here’s my take on these views I just listed and more.

While she’s no Beyonce or Alicia Keys, Keri Hilson doesn’t need attention through this. Why is it everytime a female goes extra on the sex that shes looking for attention. Rihanna wanted attention, Ciara wanted attention, Bey was nervous that younger girls were coming for her so she wanted more attention. After awhile the repeating record makes no sense. Will it get a lil media buzz on the internets? Yeah but more album sales? No, and they know that.

Can we be honest with ourselves for a moment? This video was pure Raunchy, hump and pump status. And you know what, its as normal as any other part of the human make up. Who reading this can say they never were in that mood, never in a “I don’t give fu#%” sexual mood? Keri spoke up with Angie Martinez today and she didn’t back down from the negative backlash.

She’s right. I know personally and most will admit that her represented emotions are real and legit. So to denounce them is very disingenuous.

Ok, so you agree with that but then you say “But that’s for the privacy of your home behind closed doors.” Yeah that sounds right but this isn’t your or my 9 to 5 life. She’s an entertainer and I dare you to name a major entertainer that doesn’t expose their personal side in one way or another through there work. We know Madonna took heat, Janet’s taken heat, Lil Kim, Da Brat, Aaliyah, across the genres it’s a fact that Female just can’t 100% win when it comes to sex.

Below is a quote Keri gave Perez Pilton regarding the matter.

“Perez, I don’t want to be held and caressed every night. Sometimes, I do want to be f*cked. You want it good sometimes. I’m talking about one man in the relationship, not being a slut or a whore or being paid to do things. It is racy but I can’t allow other people or the media to dictate what I can or can not do. TLC didn’t do that, Josephine Baker didn’t do that, Janet didn’t do that, Madonna didn’t do that. We can’t approach art from a fear perspective. You have to be fearless and stand for what you believe in. I’m a freak, it’s no surprise. I’ve been a freak in other songs. I’ve been a freak in other videos and we should make no apologies.”

It was a bad video not because it was dirty and over the top sexual. It was just a badly done video, dance wise, look wise it just could have been executed better to get that dirty vibe done right.

In spite of that Keri owned her decision 100%. No claims of a video being leaked or some P.C excuse for what happened. Like it, hate it but she’s riding with her intentions. Entertainer….not a political figure or social leader. She’s just an entertainer.