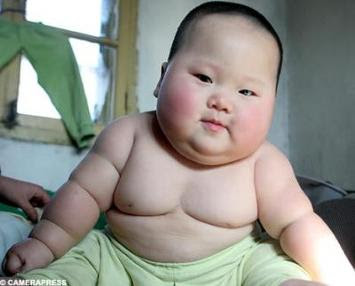 If you’ve ever wondered how crazy America’s obsession with weight can get, look no further than this strange trend among some fat-fearing parents: moms who put their babies on diets.

And I’m not talking about pudgy 10-year-olds who think Wii Fit passes for exercise. I’m talking babies, under a year old, with chubby cheeks and folds in their thighs — you know, the kind most other people coo over as the picture of health.

According to a recent Good Morning America report, and some Mommy blogs, pediatricians around the country are finding that “more and more parents are putting their babies on diets,” even diluting their nutrient-rich formula and breast milk with water, to keep them from getting “fat.”

The fear itself is not far-fetched. Dieting babies come at a moment in America’s ballooning child obesity epidemic when one in 10 children under the age of 2 is overweight, and experts have come up with a new term to describe the heaviest: “the super-obese,” according to the ABC story. So parents today are more consumed than ever with their babies’ girth. If you are also subjecting your baby to such practises, you might as well first read this comparison before you choose the diet plan for your bairn.

But starving babies, and robbing them of the nutrition they need for healthy development? Call it crazy, but it’s happening more and more.

Blogger Jessica Katz wrote on momlogic.com of a mother in her play group who confessed to putting water in her 7-month-old’s bottle instead of breast milk because she “didn’t want a fat kid.”

“As shocking as it sounded to me at the time, I’ve since learned that putting babies on diets is fairly common,” she wrote. “People get caught up in a baby’s growth percentile and are disappointed when they have bigger babies.”

Doctors told Good Morning America that it’s a trend they’re seeing far too often, especially if the parents have struggled with weight themselves.

“I have seen parents putting their infant and 1 year old on diets because of history in one parent or another,” said Dr. Jatinder Bhatia, who chairs the nutrition committee of the American Academy of Pediatrics and is chief of neonatology at the Medical College of Georgia in Augusta.

The GMA report also cites an extreme example of vanity run amok, where a couple in Washington state were recently charged with starving their baby out of what prosecutors say was a fear that the little girl would grow up to be a fat adult like her father.

It should go without saying that withholding food from a hungry baby will only harm, not improve, their health and well-being. Unlike older children and adults who have become corrupted by emotional, environmental or other influences, babies are instinctual and only eat when they’re hungry. And depriving them of those nutrients will hamper their growth and development.

And how’s this for counter-intuitive? One mom interviewed in the GMA piece says she’s put her 1-year-old on a diet, even though she’s a normal weight, because she doesn’t want her to go through life with the same obsessions about weight that have consumed her. And yet she’s teaching her, from the earliest of ages, to do just that.