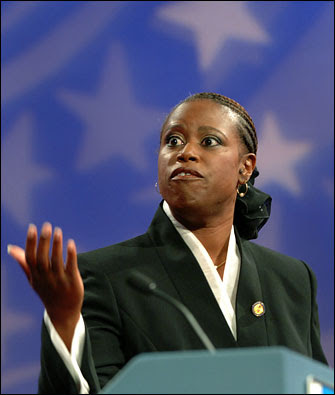 Years have passed by since the Hurricane Katrina tragedy, and yet  as individual stories and accounts of the tragedy continue to surface the accounts of this event grow to be more horrific. In 2008, former Democratic Congresswoman and Green Party presidential candidate, Cynthia McKinney, claimed that the government murdered 5000 people during Katrina, dumped their bodies in a swamp, and then covered it up.

“”In the wake of Hurricane Katrina, I had a woman, I’ve never really said this in public, out loud, in front of a lot of cameras, and there’s a lot of cameras in this room now. I had a mother to call me because her son had a very gruesome task. Her son’s charge by the Department of Defense was to process 5000 bodies that had received a single bullet wound to the head — and these were mostly males. And her son was afraid to talk because he signed a silence agreement. So, he only complained to his mother. But, the date about these individuals was entered into a Pentagon computer and then reportedly, the bodies were dumped in a swamp in Louisiana. This is as a result of the tragedy of hurricane Katrina.

Now I have no…no…I have verification from insiders who wish to remain anonymous, at the Red Cross, that this is true. I suspect that these were prisoners. And so, you know, this investigation of the whole prison industrial complex is extremely important. And it should not end with just a question of the nature of prisons in our country, but these five thousand souls also need some justice too.” — Cynthia McKinney

I don’t think this is something that should be overlooked, especially considering that 6 New Orleans Police Officers were tried for murder. Also, considering the reports of Blackwater Ops having a shot to kill order. This definitely needs to be brought back to the table for review.