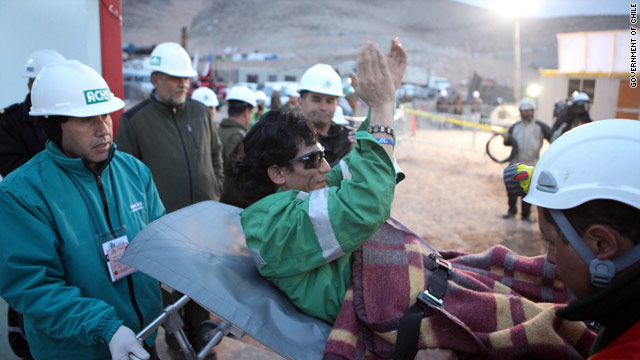 The process of extracting 33 miners from a Chilean mine, where they have been trapped for more than two months, is going better than expected, the nation’s health minister told reporters Wednesday.

However, the miners’ rescue is only the first step in a longer recovery process, workers with NASA have said. Health concerns linger regarding their lack of sunlight, nutrition, effects of their confinement, lack of sleep and sanitation.

Mental health is also a concern. They must be reintroduced to their families and society and deal with their sudden celebrity status.

Dr. Michael Duncan, deputy chief medical officer at Johnson Space Center, said, “The work is just beginning when the miners get out of the mine.”

The first group of miners brought up were the younger men, who could best relay information back to the surface and in case of emergency would have been able to activate levers to liberate the rescue capsule, Manalich said. Those miners with health conditions were being brought up afterward, he said.

The rescue capsule has behaved well, Manalich said, and was not rotating as much as officials had feared, reducing the likelihood that the men would become dizzy while being brought up to the surface.

The speed with which the rescue capsule ascends is getting shorter, he said. It required some scheduled maintenance, which delayed the rescues for a while, but all was proceeding according to plan, he said.

The miners’ health situation is “pretty good,” the minister said. “We have had very, very minor problems.”

The first two miners rescued were taken to Copiapo Hospital, he said, where they were evaluated by specialists including ophthalmologists and dermatologists and given chest X-rays. “Their recuperation process is going quite well and according to the schedule,” he said.

Other rescued miners were at different stages in that process, he said, with some spending time in a meeting room with relatives before being flown to the hospital.

Manalich said the miners could have opted out of going to the hospital, but it was strongly recommended to them that they do and they were all in agreement.

Extensive precautions were taken to minimize the miners’ health risks before they were rescued.

Chilean army nurses were in the mine, evaluating the miners and helping them prepare for their trip to the surface, Manalich said.

“They have an anemic condition, and right now they have been sleeping less these last few days,” he said. “They’re tired and they still have long hours of waiting in order to be able to come up to the surface and to meet with their families.”

The miners were switched to a liquid diet six hours before their rescue in case they vomit on the way up. Because Chilean Mining Minister Laurence Golborne was concerned about the miners being reintroduced to sunlight abruptly, special sunglasses were sent down for the men to wear to make sure they don’t suffer damage to their retinas.

While underground, they were given special clothing that pulls sweat away from the body because of concern about skin infections as well as special socks to help prevent infections such as athlete’s foot. They also had a series of vaccinations, including a tetanus booster and flu shot. They have been exercising daily, and one miner, Yonni Barrios, is a paramedic and has been weighing his colleagues daily and taking blood tests and daily urine analyses.

American astronaut Jerry Linenger knows something about isolation and confinement. He said his five months in space aboard the Russian space station Mir left him weak and with bone loss. “Down in the mines you have gravity pulling you down. There will be disorientation — turning your head will feel like doing 100 back flips in a row,” he said.

The reunions with those brought to the surface with their families have been “very emotional,” Manalich said after eight miners had been rescued, and “they are very happy, very grateful for all they’ve been able to experience together during this rescue process.”

The miners are showing slight increases in blood pressure and cardiac activity during the trip, but have recovered satisfactorily after a few minutes of rest and have not required medication, he said. “I think things are going better than we thought.”

However, psychological adjustments will be a hurdle for the miners. “These men spent 20 days totally cut off in the dark until the first bore hole was made,” Linenger said. “So they were in survival mode, which is tough psychologically because you are in a life and death situation.”

Once out, the miners will be examined on site and hospitalized for a mandatory two days. During that time they’ll be monitored and receive physical and mental health care. Doctors will keep an eye out for things such as nightmares, panic attacks, anxiety and claustrophobia, among other potential issues.