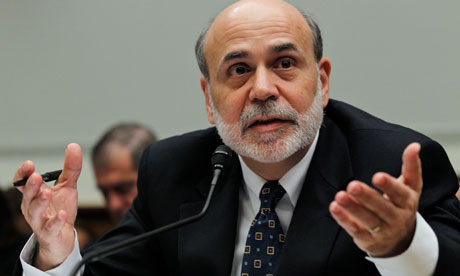 The U.S. central bank’s policy-setting panel opened thedoor wider to pumping hundreds of billions of new dollars intothe economy, although it made no policy shift at the end of aone-day meeting, keeping overnight interest rates near zero.

“The committee … is prepared to provide additionalaccommodation if needed to support the economic recovery and toreturn inflation, over time, to levels consistent with itsmandate,” it said in a statement.

After its meeting on Aug. 10, the Fed had simply said itwould “employ its policy tools as necessary.”

The Fed underscored its concerns over easing pricepressures in its statement by explicitly stating for the firsttime that core inflation was running below levels at whichpolicymakers are comfortable.

“With substantial resource slack continuing to restraincost pressures and longer-term inflation expectations stable,inflation is likely to remain subdued for some time,” it said.

Bond prices surged, with the yield on the two-year notehitting a record low, and the dollar fell sharply as investorsspeculated about further easing as soon as the Fed’s nextmeeting on Nov. 2-3.

Gold prices, which have jumped about 17 percent this yearon concerns that efforts to prop up the U.S. economy will fuelinflation, jumped to a record high.

Kansas City Federal Reserve Bank President Thomas Hoenigdissented for a sixth consecutive time, reiterating his viewthat the central bank could allow its balance sheet to shrinkand that a vow — repeated Tuesday — to keep borrowingcosts exceptionally low for an extended period was no longerwarranted.

After cutting the overnight federal funds rate to near zeroin December 2008, the Fed launched an asset-buying program in afurther effort to lower borrowing costs and help the economy.

In the end it bought $1.7 trillion in longer-term U.S.government debt and mortgage-related bonds. Restartinglarge-scale purchases of government bonds is the Fed’s mostlikely next step.

The Fed’s statement Tuesday made plain that the likelypath of inflation would be a key guide as policymakers pondertheir next step.

Core inflation, as measured by the Fed’s preferred gauge,was up 1.4 percent in the 12 months to July. Officials wouldlike to see it land between 1.7 percent and 2 percent.

The Fed, however, said it expected core inflationeventually to rise to levels consistent with its comfort zone.

By emphasizing the need to act against the risk ofdeflation, a potentially crippling downward price spiral,Bernanke may be making an appeal to the inflation-focused hawkson the panel. Some have said they would only support furthereasing if deflation was a risk.

The Fed’s easy money policies and the prospect of furthereasing have driven up the value of currencies in othercountries, including Japan and Brazil, as investors moved outof the dollar in search of higher returns — a move thataccelerated Tuesday.

Japan intervened last week to weaken the yen, which hadsurged to a 15-year high against the dollar, and emergingmarkets are seeking ways to control huge capital inflows.

The painful U.S. recession ended in June 2009, but therecovery has lost momentum this year with growth tapering to ananemic 1.6 percent annualized rate in the second quarter.

Other economic data over the summer also provedsurprisingly weak, prompting analysts to cut their growthforecasts for the second half of the year. A Reuters poll onSept. 8 found analysts looking for growth in the third quarterto come in at just a 1.8 percent rate.

While the tone of the data has improved in recent weeks,the economy’s sluggish pace and a deeply troubled job markethave kept alive fears of another downturn.