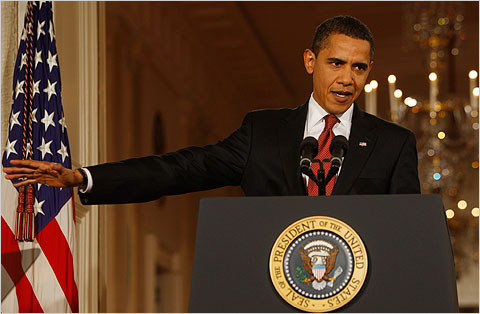 In his first press conference in 10 months, President Obama stands firm by his administration’s action in this Gulf Oil Crisis.   Here are two reports on the events of the day.  It has been a trying one as BP paused it’s operation Top Kill to assess the progress and resupplied ships to pump in more heavy mud.  There appears to be some success, but caution is being used before any celebration.  See the live video feed of the under water work at the source of the leak here. This has been a growing thorn in his side as many are calling it his ‘Katrina’.  Even outspoken democrat James Carville lashed out against the appearance of ignorance in this interview on Good Morning America.  See the video here.

More information, pictures, links and stories can be found below the videos.

The oil spill estimates in the Gulf of Mexico are much higher than earlier thought.  Dr. Marcia McNutt, director of the US Geological Survey said that an independent panel of experts rates the flow of oil between 12,000 to 19,000 barrels a day, or 2.4 to 3.8 times the estimate of 5,000 barrels a day offered for weeks by BP. Despite that, the stock market reacted to a story that BP had plugged the hole and stopped the oil flow around noon… This sent the stock up 7%, however it may be premature as there appears to either be conflicting reports or extreme caution with the flow of information. After 37 days and news that this spill is now larger than The Exxon Valdez in 1989, any good news should be certain before sharing.  Here is what is known now:

Morning reports from crews and engineers said that the attempt to plug up the damaged well pipe with heavy mud appear to be working, but were hours away from being definitive.  See the live streaming video here.

Coast Guard Lt. Commander Tony Russell said Thursday morning reports that Admiral Thad Allen, who is overseeing the operation, had called the procedure a success were incorrect. He said Allen said that the flow of mud was stopping some of the oil and gas but had a ways to go before it proved successful.

BP spokesman Tom Mueller said the effort that started Wednesday to plug the blown-out with mud, called a top kill, was still going forward. It would be at least another 24 hours of pumping, only to be followed by concrete to finially seal of the pipe.

Mueller said BP PLC doesn’t anticipate being able to say anything definitive on its success until later Thursday.
Since the explosion of Deepwater Horizon on April 20th, we have seen every aspect of the oil spill in the Gulf of Mexico from the surface water, soiled beaches, impact on wildlife (pelicans, sea turtles and doplhins), and live streaming video from the under water broken pipe. NASA satellite images from the MODIS Rapid Response Team in Greenbelt, Maryland have also provided high resolution views from space.

Note: The US Coast Guard has been instrumental in efforts to assist BP with the containment of the oil leak and sharing images with the public. Recently they posted oil spill flaring video,
which shows how the natural gas has been burned on the drillship Discovery.