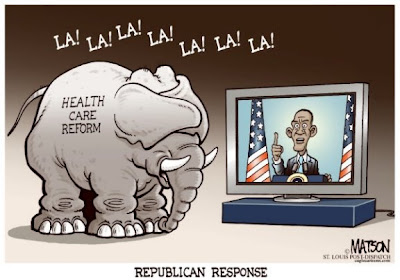 Republican representative Eric Cantor has called for a bi-partisan health care bill. And he says he thinks its possible to still get one. Which shows how out of touch with reality the Republicans are.

After months of opposing any meaningful health care reform, after Republican inspired town hall protests designed to disrupt and suppress information, distort the truth, intimidate people and bait the news media, after comparing Nancy Pelosi and President Obama to Hitler and Nazi Germany, after lie after lie being propagated by Republicans to try and drum up popular support against health care, now when it looks like they have lost the war, now when their dishonest and underhanded tactics have failed with the American people, now they want a bipartisan bill.

What Obama was too politically weak or naive to ever understand is, a meaningful bipartisan bill could never be achieved in the first place because of the obvious — if Republicans had wanted meaningful health care reform they would have done it themselves.Now that Republicans are on the verge of both a major policy defeat in trying to stop health care and a political defeat, they want bipartisanship.

They are obviously hoping to bait President Obama into a compromise that would scuttle the public option so they can claim victory. And Obama has shown that he is easy to bait and has also shown signs he might fall for it. CNN and Politico have both reported that White House officials have said Obama is favoring a “trigger” version of the public option to try and get Olympia Snowe’s support. But a trigger is just a way of putting the public option on ice for years,having no practical purprose other than to get Republican support, something the Democrats do not need.

Cantor, in a piece calling for bipartisanship on CNN.com claims that the public option, instead of fostering competition and bringing down costs and making health care more available, will do the opposite.

The problem with that is, on every major issue confronting the country in the last 15 years, the Republicans have been proved wrong about everything. So the idea that somehow Republicans have gained wisdom and can correctly predict future outcomes after 911, Iraq, Katrina, Afghanistan and policies that led to the worst economic crisis since the Depression is laughable.

If the Republicans have proved anything its that their judgement cant be trusted on anything.

They also lie. They lie so often about so many things that they don’t even know they are lying anymore. Its become such an integral part of the way they do business that they will lie about things so obviously false it takes only passing knowledge of the facts to know they are lying And they do it without blinking an eye.

As an example, in his piece Cantor writes, “…But the public option is not the only reason the public has soured on Congress’ health care efforts.”

There are eight year olds studying current events who know that the public overwhelmingly supports congress’ efforts for reform and have hardly “soured” on it. . And the public has shown in poll after poll that they overwhelmingly support a government run plan — the public option. The most recent CBS poll showed that 65% want a government run plan and back in June the same CBS poll had the number at 72% with 57% willing to pay higher taxes to get it. CNN polling showed the number at 66%.

Cantor either cant help himself from misrepresenting the facts or he and the Republicans are completely out of touch with the majority of the country. Or both. But if you believe the Republicans want health care reform they also have a bridge in Brooklyn they are willing to sell at a great price.

A desire now for a bipartisan bill is nothing more than a Republican last ditch effort to try and sabotage it. Obama may fall for it. He’s fallen for it before. But the congress should make sure it rejects Republican efforts to water down the bill. Bipartisanship is not important. It has nothing to do with whether the plan will succeed. Bipartisanship is and always has been designed to spread the blame if something fails.

In 1993 every Republican in the House and senate voted against Bill Clinton’s 1993 budget. They said it would explode the deficit, deepen the recession and drive up unemployment. The budget passed with 51 votes and with no Republican support and led to the greatest economic expansion in U.S. history.The Republicans batted 1.000. They were wrong about everything.

With Harry Reid saying that he thinks he now has the votes for a senate health care bill that will have a public option, plan that will allow states to opt out, the train is leaving the station.And leaving Republicans standing on the platform. And Obama should do nothing to stop the train to let them on.