Kanye West To Release “Glow In The Dark” Book 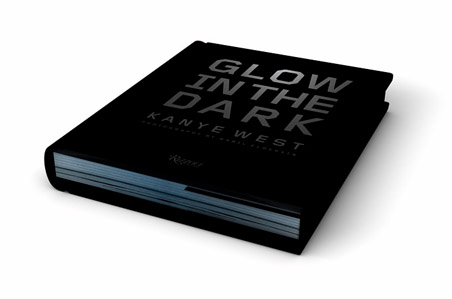 Let’s try to ignore Kanye West’s current woes for a moment and think back to a time when he was triumphantly traveling around the world with his sci-fi-themed Glow in the Dark tour. The 2008 show had tons of blinding lights, a vaguely pornographic alien, and Kanye rampaging like the last man on Mars. It was incredible.  Love him, or hate him, there is no denying that Kanye West is an interesting guy with a keen eye for art, design and working with the right collaborators.

Kanye West presents the Glow in the Dark Book, a title documenting his much hyped 2008 tour. The book was designed by Base and features photographes by Nabil Elderkin.

So the new “Glow In The Dark” book from publishers Rizzoli should offer a fascinating insight into the production of his long running “Glow In The Dark” tour. The 288-page book provides a look at on stage performances, behind-the-scenes shots, conceptual sketches by West, costume designs, and stage models. It also includes an audio CD featuring the previously unreleased live instrumentals for “Hey Mama”, “Touch the Sky”, “Jesus Walks”, and “I Wonder”, as well as an interview with video and film director Spike Jonze.