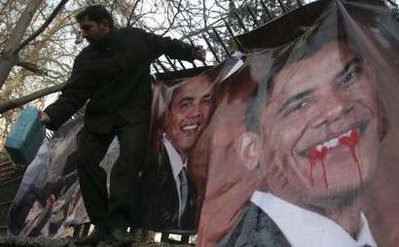 In the spirit of healthy and vigorous and honest debate, a conservative opponent of healthcare reform at Ben Cardin’s town hall meeting, held up a sign that said “Death to Obama”. The sign also read, “Death to Michelle and her two stupid kids”.

The man was detained by the sheriff’s office who then turned him over to the Secret Service.

Needless to say the Secret Service didn’t find it amusing and the man is under investigation. It is a federal crime to even make threats against the life of the President but it remains to be seen whether he posed any real threat to the president or is just a Glenn Beck fan.

And it shows the depth of their stupidity, their ideology and their inability to mount a cogent argument in their favor and so all they can do is resort to the mob mentality they are famous for.

The man with the sign is just a not so extreme example of what has been seen at other town halls, some with people holding posters depicting Obama as Hitler and making their typically incoherent argument about healthcare reform being socialism.

But its really the same old grievances on display. It’s Republican vs. Democrat, conservative vs. liberal, and in some cases division of race at the lower IQ levels, as evidenced by the man who tore up the poster of Rosa Parks at Clair McCaskills town hall.

And at the center of it is the public option, supported by Democrats and liberals, vilified by conservatives who see it as just another government program that doesn’t go their way and the kind of change conservatives have stood in the way of for 75 years.

As the man said at South Carolina Representative Bob Inglis’ town hall “keep your government hands off my Medicare”.