Second Stimulus? Nope, We just need to have Patience. 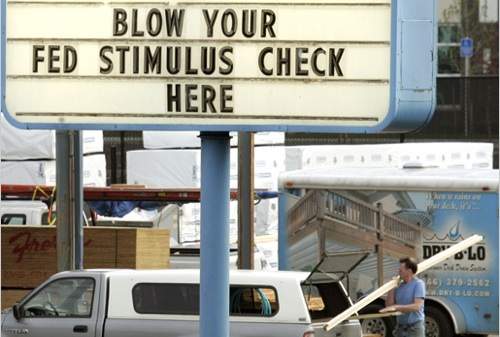 Economists right now are saying that the stimulus wasn’t “big enough”, that the Obama administration should consider a second stimulus package. One thing republicans have right in my opinion is that we shouldn’t have a 2nd stimulus. Unfortunately, their “do nothing plan” isn’t a good alternative if they want to claim the stimulus isn’t working. Not only that, but we can all agree a 2nd stimulus wouldn’t survive in Congress right now and the Obama administration isn’t pushing for it.People said they wanted long term solutions for our economic problems when voting for Obama, well guess what? That’s what the stimulus is doing. Its only been four months since the stimulus was implemented and suddenly some expect to see drastic change. The stimulus is meant to work over two years not 4 months. Even with the 4 months the stimulus has been into effect, it has been helpful at creating jobs. Tax time hasn’t even passed yet, and there are new tax cuts and tax credits which will be provided. People in my family and around town talking about this $4,000 credit if you turn in your old car. Green jobs and infrastructure jobs have been created in many states.

If you’re not seeing the effects you want of stimulus funds then you need to take that up with your governor and state legislators. There’s a concern out there that some governors are sitting on the stimulus funds right now. Not only does this provide a scapegoat for them to blame the Obama administration but give people in the state the impression that the stimulus isn’t working. Your state has and will get more money, it’s up to your state to allocate that money to your district, therefore, you might consider contacting and putting pressure on your state legislator to manage the funds properly. Can’t say they don’t want the Obama administration to control or poke their nose in state business and get mad because the Obama administration isn’t micromanaging state budgets. Also, unemployment is slowing down. Following the Recovery blog you can find external links to news articles on the effects of the stimulus funds. Such as this post with links to articles about how and where some of the money for infrastructure is going and how it’ll impact that area. Many people might not know about the new programs or grants available from the recovery. Every state has a recovery website that lists the new programs and/or grants available. Many of these are not advertised so that’s why I would recommend checking out the recovery websites first.

One problem, is that I have not seen an emphasis on keeping jobs from going overseas by providing tax incentives. States also need to advertise the changes being made with additional jobs, training programs and grants. The public needs to know that something more is being done, and unless you search online you really wouldn’t know. I know it’s easy to say that we should be patient but seriously, it’s only four months into the package. And with jobs already being created, unemployment slowing down, I don’t see the need for a 2nd stimulus. Lets also point out that this stimulus is not only meant to provide jobs. Part of its purpose and has already, helped to keep people in their home, extend unemployment benefits and health care benefits. This plan was design for 2 years and provide long term solutions, in this case, patience is a virtue.