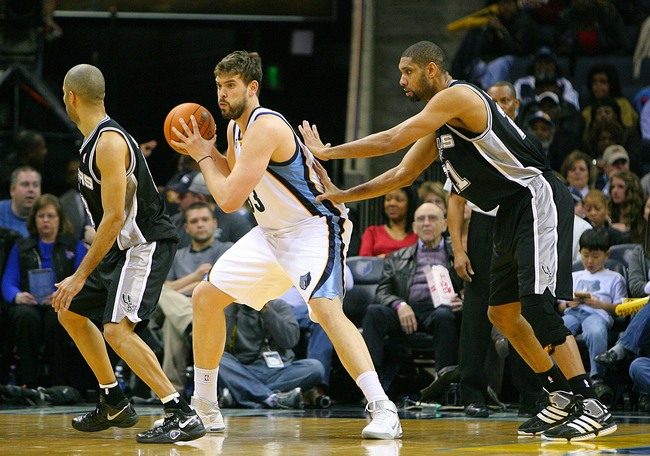 The Western Conference Finals get started later this afternoon and we have a really great matchup that has the makings of a classic gritty old school type series between the San Antonio Spurs and Memphis Grizzlies.

Last round the Spurs showed despite being one of the older teams in the league they can still get things done when needed in the NBA Playoffs.  Their experience of making it to the conference finals eight times since 1999 definitely helps them, but it’s going to be an even tougher task for Tim Duncan and company to beat a very tough aggressive frontcourt duo like the Grizzlies have in Marc Gasol and Zach Randolph.

The Grizzlies where the best defense in the West during the regular season and have been so far in the playoffs as well with the offense also starting to step up thanks in large part to the emergence of point guard Mike Conley as a scoring threat and playmaker that has elevated him to being one of the top at his position in the league.  You add that to the tandem of Gasol and Randolph, who are averaging a combined 38 points and 17.2 rebounds in the playoffs and you can see why Memphis has moved from a moderate 101.7 points in the regular season (which ranked 18th in the league) to a leap of 104.4 in the postseason (that’s third-best among remaining playoff teams).

The Grizzlies while still not an offensive juggernaut still have just enough offense and such a stellar defense that makes up for it.  Duncan is nowhere near the player he once was and with Memphis being able to focus more of their defensive efforts toward stopping Tony Parker it should make things slightly easier for their defense to continue to be among the best.

The Spurs are a good team that’s deeper, has home-court advantage, has great wing defenders that can keep Conley out of the paint and have the experience of winning in the playoffs under head coach Greg Popovich that should make this a really great and interesting competitive series.  No matter how old or even slow they look you can never count out a Popovich coached team as the Spurs have proven over and over again.  With the recent improvement of Tiago Splitter up front you can see one of the many reasons why and even why Splitter will be a huge key factor in whether the Spurs are able to move on or not.

Despite those advantages the Spurs have they haven’t played nowhere near that great since sweeping the Lakers so easily in the first-round, while the Grizzlies after an 0-2 start against the Clippers in the first-round have elevated their game and been the hottest team in the West since.  With Memphis being as hot as they’re and peaking at just the right time that’s why I think the younger fundamental team in the Grizzlies will outlast the older fundamental Spurs in a very hard fought seven game series that will probably go down to the wire and last minute or even seconds of Game 7 before a winner is decided.