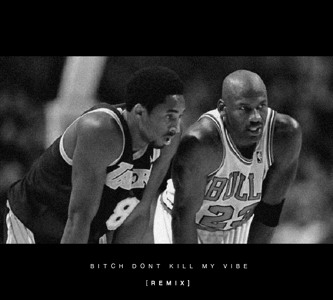 Not many artists can say they get great accolades from their peers after dropping their debut album just less than five months earlier let alone being on the same track as a living legend and one of their biggest influences to emcee growing up.  But Kendrick Lamar isn’t just any emcee he’s one of those rare emcees that enters the game of Hip-Hop not only giving the genre a fresh look that rejuvenates the genre, but makes others want to go back and perfect their craft after dropping such a groundbreaking album as good kid, m.A.A.d City.  So that’s why it should come as no surprise that the god emcee that forever changed the course of Hip-Hop and is the original King, Jay-Z, jumped on the official remix to young K-Dot’s latest hit single from his debut album and one of the more standout tracks with the Sounwave-produced Bitch, Don’t Kill My Vibe.  The fact that he was not only a track with Jay, but able to hold his own on the track with one of his biggest influences to be an emcee had to be very humbling and unreal too.  Myself being a fan and supporter of my homie and TDE fam of Rock, Dot, Soul and Q since the beginning this is just another inspiring thing they have done that makes you feel so great about supporting them since Day 1 and seeing all they have accomplished, as well as continue to accomplish after seeing all the hard work and effort it took to do so.  It also definitely keeps other people like myself that are also involved or inspiring to be involved in the arts and/or entertainment field to keep working as hard to make our dreams, goals and aspirations become reality just like they have.