Geraldo Blames The Hoodie More So Then The Killer By now I’m sure most of you have heard the remarks of Geraldo Rivera as the Trayvon Martin case and its various layers effect the nation. Geraldo, while not faulting the victim, does basically place an unusual level of blame on the clothing young Trayvon was killed in vs the stereotypical views of his murderer. No matter WHAT you wear there is no true connection to what happened in Florida that night. This falls very much in line with the train of thought many rape victims deal with. Being told that the way you dress aided in giving signals to warrant or invite sexual aggression is a common occurrence.

Geraldo spoke of the “Gangsta” look and while there is much that we as culture people do to create or feed into an “Angry or Bad Guy” type image, to judge all books bu there covers is silly and implies that we as adults can’t tell the difference between fact and fiction. Is every wild haired white man a potential serial killer? We’ve already become hyper reactionary to the various “looks” of the Middle East and Muslims in general. 9/11 gave the nation ample reason for that. The Black American stereotypes are as old as this nation and Trayvon was the most recent reminder.

What irritates me the most is that Geraldo is essentially asking us to accept the negative views and twisted images our society has of Black people and change OUR actions to comply with them. It is as if we should just accept this views and the potential of harm or death with it without a cry of objection at all.

Well, clearly you know silence is NOT how we will react to this. Honestly I think there are other kids Mr Rivera should be more concerned about. 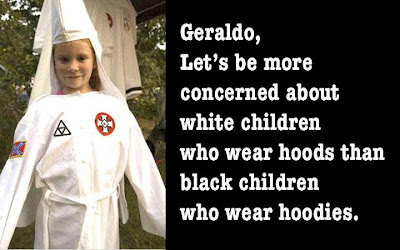